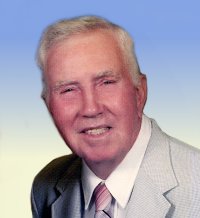 Carroll Glen Rowan, 93, of Millstadt, IL, having led a productive and honorable life, boarded a heaven-bound train on Monday, April 18, 2022, departing his Millstadt, IL residence for the last time. Carroll never wasted one God-given breath of life upon his entrance to the world on Thursday, December 27, 1928, in Makanda, Illinois. He counted himself more than lucky to grow to adulthood and marry the love of his life, Mary Violet Burris, on January 21, 1956. Sixty-four years of building a life together, creating a home and raising their family represented the best of life for Carroll.

Familiar with hard work and a desire to carve out a family oasis, Carroll was an avid gardener who was able to grow anything and everything. He literally had two green thumbs! Farm to table before it was a fad, a good cup of coffee, endless bird-watching, petting his favorite dog, and beautiful daily views of changing seasons fed his body and soul. If you had a question about Nature, he knew the answer and was delighted to share it. Carroll also loved fishing, especially on the Mississippi River or at Kentucky Lake.

To his children, Becky and Steven, Dad or Daddy, was a character larger than life. He was there to bathe, feed, cuddle, and entertain them as babes. As they grew he took them fishing, on Florida vacations, and even bought a woods and creek for their playground. Known as “Poppy” to his grandkids and family, he was always quick with a joke or a prank, or a tidbit of advice. All children gathered around Poppy. They loved his stories, gentle teases, his funny made up songs, and best of all – his listening to their stories and dreams. They also knew if he said “no,” he meant it; though most kids knew instinctively to be on their best behavior in his company. He found ways for his own children’s dreams and his dreams to mingle and grow through the horses, cattle, rabbits, and other adventures on the farm. A friend to all animals in the area, it is no surprise that if there was a toad trying to get away from the lawn mower, Poppy stopped and rescued him; a baby bird out of the nest, Poppy put him back in; or a turtle crossing the road – not to worry if Poppy was around. When he wasn’t with his family, an animal or in the garden, he worked his job, retiring as a clerk for Missouri Pacific Railroad and Union Pacific Railroad.

His grandsons, Alex and Brendan, benefitted from Poppy’s lifelong commitment to nurturing positive character traits in children, teaching useful skills and imparting the idea to work hard and play hard. And Carroll felt himself exceedingly rich to be a father and a grandfather, leaving a beautiful legacy of love behind. In addition to such a full life, Carroll also served in the U.S. Army during the Korean War, and was a member of First Congressional Church in Dupo, IL.

Memorials: Parkinson’s found Carroll to be a formidable opponent as a valiant warrior in battle against this disease. Memorials may be made to the Parkinson’s Foundation to continue the fight for him and many others.

Funeral: Private family interment at Rowan Cemetery, Makanda, IL will be officiated by Rev. Janice L. Ringenberg, who called Carroll “Dad,” as he and Mary thought of her as a second daughter.

Services: Public celebration of life will be held at a later date.