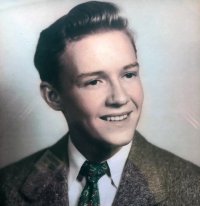 Born on June 8, 1928, Carl Hann saw a world transform. Surviving poverty during the Great Depression as a child and developing an inner sense of determination through that experience, Carl always worked hard and tried to excel at whatever he did. His first job was at about the age of 7 when he pulled a small wagon with a goat to bring water to field harvesters. He was known as a track star in high school and played drums in the high school band. He maintained his love of drums throughout his life and regularly played with gospel bands and at many church services.

Carl served in the National Guard of Indiana just as World War II was ending. Although he never saw active duty overseas, he was proud of his service. After being honorably discharged from the National Guard, he attended Butler University for a couple of years. During this time, he met a young, beautiful woman named Mary Jo Miller who grew up on an Indiana farm with 2 sisters and 6 brothers. They quickly fell in love and were married. Carl decided to support his wife and soon to be born twin daughters by ending his college studies and going into business for himself. His main career involved cookware sales, but he dabbled in a variety of other ventures including insurance, health care products, and mutual funds.

Over the years, Carl had his share of successes and failures, but never lost that inner sense of determination. At times he struggled. However, he always maintained a faith that a better day was coming. In many ways, Carl was a complicated individual as most of us are. He could show compassion by purchasing a steak dinner for a homeless man. He loved to be around people and be the life of a party. But Carl could also display a streak of stubbornness that sometimes made his life more difficult.

In the end, Carl loved his family and did his best to provide for them. That is the most precious gift that any of us can give.