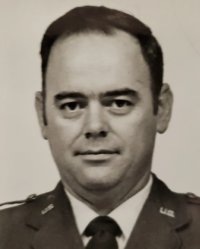 Byrd Shepherd, USAF, Captain (Ret.), 85, passed away peacefully in the arms of his wife of 59 years, MaryLou Shepherd (nee Jackson) on October 25th, 2022 in Shiloh, IL. He was surrounded by all of his loving family. Aside from the military, Byrd’s greatest devotion was to all of his family. He loved checkers and was rarely beaten, enjoyed playing cards like setback & nickel/dime poker at his family reunion – also his favorite vacation. He enjoyed doo-wop music like The Platters on the wind-up victrola, and often danced MaryLou around the kitchen while listening. He encouraged everyone to join the military or attend a military academy. He was a member of Mensa and had Lifetime memberships in: Veterans of Foreign Wars, Vietnam Veterans of America, PhotoMappers Association, and Sons of the American Revolution. Byrd founded Camp 443 of the Sons of Union Veterans of the Civil War in Belleville, IL.

Byrd’s immediate family all survived him:

Byrd proudly served in the Marine Corps, the Army, and the United States Air Force. In 1957 he joined the Army where he served as a Cryptographer and Radio Operator and served in Okinawa and Korea. He was deployed to Vietnam in 1963. While in Vietnam, Byrd was attached to the Military Assistance command Vietnam (MACV), to train the South Vietnamese Army. He was exposed to Agent Orange during Vietnam, which affected his health thereafter.

After serving in the Army for 9 years, Byrd joined the United States Air Force to pursue his higher education. He began as a Cartographer (PhotoMapper) and Computer Analyst. He began night school in Barksdale Air Force Base, then while stationed in Hawaii, he finished his Bachelors of Business Administration from Chaminade University, graduating with honors. After he attended Officers Training School, he was commissioned as a 2nd Lieutenant in 1970. He transferred to Scott Air Force Base as a Captain, where he earned a Master’s in Data Processing from Washington University in St. Louis with honors, followed by a Masters of Business Administration from Southern Illinois University with honors. He was on the team that programmed the Strategic Airlift Command mainframe at Scott Air Force Base.

Byrd retired as a Captain in the Air Force, after 24 years serving his country, with multiple honors. He served under 17 command divisions, from Ordnance to Logistics to Military Airlift Command. He earned 19 honors and medals over the course of his service, including the Commendation Medal USAF, Armed Forces Expeditionary Service. His father, Albert Shepherd, served as a Seabee in WWII, and his son, Scott Shepherd, served in the Marine Corps as a sniper and was deployed during Desert Shield and Desert Storm. The family’s military service goes back to the French-Indian War.

Byrd was a Computer Analyst for Southwestern Bell, in St. Louis, MO before retiring permanently in 1991. During retirement, he walked a portion of the Appalachian Trail. Most of all, he loved sitting on the porch watching birds and wildlife with MaryLou, pursuing genealogical mysteries while following his family’s roots to the 1500’s; and watching collegiate sports, particularly University of Kentucky teams. Byrds favorite was UK Basketball, which his daughter Cassandra always watched with him.

Byrd was preceded in death by his:

Byrds Memorial Service begins at 1:30 pm following the visitation. It will be a military honors ceremony with everyone welcomed to share their personal memories of him, as he requested. Interment will follow at Trent Montgomery Cemetery, Rose Hill, VA.