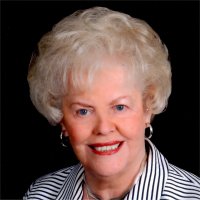 Beulah May Penry Elder, nee , Dillard was born May 22, 1930 to John and Jane, nee Digby, Dillard in East St. Louis, IL. Beulah closed her eyes and boarded the sweet chariot bound for glory on May 10, 2020 at The Colonnade Senior Living in O’Fallon, IL after a two and one-half year battle with cancer.

Beulah was preceded in death by her:

In 1951 Beulah married Norris Penry, a marriage that lasted 47 years until his death in 1998. Beulah and Norris were members of the Nazarene Church where she held many offices, Director of the Junior Choir, Sunday School teacher, and church board secretary. Although Beulah had no biological children, she loved children and was a mother to many.

After the death of Norris, Beulah then renewed a 50 year friendship with Bob (Robert) Elder, in 2004. Beulah and Bob were married at St. Matthew Methodist Church on November 14, 2004, and they both joined St. Matthew UMC.

Beulah is survived by her:

Beulah was a beautiful and gracious lady who always found the good in every situation, and loved singing for her Lord. She had a heartwarming smile for everyone, loved to laugh, and we can’t forget shopping. Beulah and Bob spent many winters in Florida where they made good friends who became their extended family. Other close friends enriching her life were Jean and Harry Cruncleton, Nancy and Freeman Hartmann, Robert Stamm, Jim and Dotti Luechtefeld, and many at St. Matthews and the Nazarene Churches.

Memorials: Memorials may be made to the Hospice of Southern Illinois, St. Matthew’s UMC, or St. Clair Memorial Park Cemetery and may me sent to Kurrus Funeral Home.