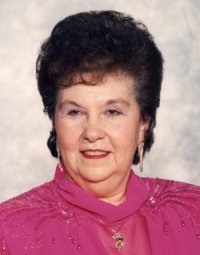 Betty was preceded in death by her:

Betty was an independent Sales Consultant and a Director with Mary Kay Cosmetics. She was a secretary for the Commander of the Logistics Command War Plans at Scott AFB. She joined the Eastern Star in 1947 and became and Grand Lecturer Emeritus. She was Past Worthy Matron of the Rob Morris Chapter 98, O.E.S.; White Shrine of Jerusalem; Past Queen of the Al Sihah Temple Daughters of the Nile; A.D. Manners Demolay Grandparent; a Past President of the Wednesday Club, Inc.; and a Past President of the American Legion Auxiliary in Bement, IL. She was active in the Women’s Club of Belleville and the 75th Division Association Auxiliary.

Memorials: In lieu of flowers please make memorials to the Shriner’s Hospital for Children.

Funeral: Eastern Star Service will be held on Saturday, October 16, 2021, at 1:30 pm at Kurrus Funeral Home. Interment will follow at Valhalla Gardens of Memory in Belleville, IL.