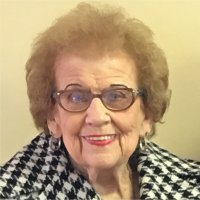 Betty worked for 30 years at Scott Air Force Base for the Air Weather Service, Air Force Communications Service and Defense Electronics Communication Office. She was a graduate of East St. Louis Senior High School class of 1944. She was a member of St. Michael’s Episcopal Church, O’Fallon, Illinois.

Memorials: Memorials may be made to the St. Michael’s Episcopal Church.