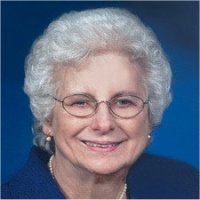 Betty D. Lewis, 98, formerly of Litchfield, passed away at Cedarhurst Assisted Living Facility in Shiloh Illinois on May 14, 2020. She spent much of her early years living in Barnett north of Litchfield.  She graduated from Litchfield Community High School in the class of 1939 as the class valedictorian. While still at LCHS Betty started working for Sunshine Magazine in Litchfield & continued there until her marriage to William Van Lewis of Waggoner on August 8, 1941.

In addition to Litchfield, during their early years together Betty and Bill lived in San Francisco and Larkspur, California, Hattiesburg, Mississippi and Carlinville, Illinois.

Betty loved to travel all her life. She enjoyed camping with her family, visiting her children and grandchildren, and later in life Betty enjoyed group travel, especially her trips with cousin Marge.

Betty also enjoyed watching sports, especially baseball. She would listen to the St. Louis Cardinals on the radio and watch whatever MLB game was on TV. Betty especially enjoyed her trips to spring training in Jupiter, FL.

Mrs. Lewis returned to the work force in 1967 in the accounting department of St Francis Hospital remaining there until her retirement in 1990. She was a member of St Timothy’s United Methodist Church and was active in the United Methodist Women, the St Francis Hospital Auxiliary, the Litchfield Woman’s Club and took part in the Academy of Lifelong Learning
at Lincoln Land Community College.

Betty was preceded in death by her parents, Chancey and Cecil Davis, husband William in October 1986, brother Harlan Davis, and three nephews.

Services: Because of COVID19, there will be a celebration of Betty’s life at a later date. If you would like to honor Betty now — call your family and tell them you love them, reach out to a friend, be kind to a stranger, respect your neighbor, pick up a history book about the Greatest Generation, and social distance until this is over so we can all be together again to pay respect to a beautiful soul.