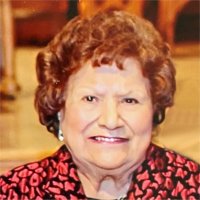 Amelia Joan “Amie” Nersesian (nee Marifian),1934 -2020 a lifelong resident of Belleville and loving wife, mother, and grandmother, passed away peacefully at home Friday, July 18, with her beloved husband Henry by her side.

The two were married for more than 62 years. Amie’s kindness, humor, generosity and deep love for her family and friends will be forever remembered and cherished. She was born in East St. Louis, IL., the daughter of George and Shamrig Marifian, who immigrated to the United States in the 1920s following the 1915 Armenian Genocide. Her father, and following his death, her older brother operated the family dry cleaning business in the East St. Louis and Belleville areas for five decades. Amie began working in the family business as a teenager. Amie was a graduate of Signal Hill Elementary School and Belleville Township High School.

Amie and her soulmate Henry married in 1958, but the relationship began many years before when the pair met at a birthday party when Amie was two and Henry was six. Years later as they courted, Amie always said they had to delay the wedding until Henry paid off the debt on his delivery truck. In 1956, they were among the first members of the newly formed Holy Shoghagat Armenian Apostolic Orthodox Church in East St. Louis and enjoyed the distinction of 1 being the first Armenian couple to marry in the new Church. Following their marriage, Amie and Henry settled in Belleville, and together they owned and operated Bridgedale Cleaners in Cahokia for 60 years.

During their decades of marriage, Amie and Henry enjoyed many activities. Among their most treasured was their Saturday night “date night,” when they would go dancing. They also loved traveling, taking Caribbean cruises, playing tennis, card playing, watching Cardinals baseball, supporting their church, and, most importantly, raising their two children Neil and Julie. Amie spent her entire adult life steadfastly supporting her Armenian church. She was an active parishioner, member of the Women’s Guild, Sunday School assistant and a member of the Armenian Church Youth Organization. She was a born organizer, heading up many church events including the annual dance, bake sales, picnics and dinners, and, as friends lovingly remember, had her special way of organizing the activities. Even in her advancing years she enjoyed baking with the Women’s Guild. Amie and Henry faithfully participated in Sunday services via Facebook Live during the last few months.

In addition to her parents, Amie was predeceased by her father-in-law Seragan Nersesian, sister and brother-in-law, Alice and Len Mooradian; sister-in-law Barbara Marifian; niece Georgea Matoesian, and nephews Norm Melton and Richard Brewer; and a cousin Samuel Nersesian.

She is survived by a large and caring family including her son and daughter-in-law Neil Nersesian and Lori Diamond; daughter and son-in-law Julie Nersesian Wiegers and Joshua Wiegers; grandsons Davis Nersesian and James Wiegers; granddaughters Laurel (Roman) Garcia and Madeline Wiegers; and great-grandchildren Winnie and Leo.

Throughout her adult life Amie was a volunteer extraordinaire. The Belleville community honored her by voting her “Volunteer of the Year” in the Belleville News Democrat Readers’ poll. It was a befitting tribute that recognized her many years of dedication to social service organizations, including the Salvation Army and the Junior Service Club. She was also active for many years in the Loyal Order of the Moose, and Dorchester and Oak Hill Clubs, where her tennis enthusiasm earned her the nickname “TC” for “Tennis Champ.” She was an avid dog lover, and fondly remembered her cherished chihuahuas and Maltese furry friends. Amie had an engaging sense of humor and quickly became friends with anyone she met. She and Henry generously offered their home as a second residence to many, including visiting pastors. An accomplished cook, she replicated many wonderful Armenian dishes handed down from her grandmother to her mother and from her grandmother to her. Amie’s friends and family recall her fabulous “leftover nights,” which were always special.

Amie is remembered for her unwavering commitment to her family, faith and friends. A wise and loving mother, sister, grandmother, aunt, cousin and friend, she was one of the “Silent Generation” who blessed the community with her life and presence.